Last year saw the release of a very cool R package, wordcloud2, an interface for wordcloud2.js. In this post we take you through some simple steps to produce a great looking wordcloud from your text documents.

1 Load packages and read in data

Create a folder in your working directory called Texts and save your .txt files here. You can save as many text files are you want as the code will read them all in, however to avoid problems it is best to save your files as .txt files.

You can use the tm package to clean up the text files and remove words that you want to exclude from the wordcloud such as “the” and “a”.

In the fifth line above, stopwords(“english”) provides a list of stop words such as “the”, “and” etc. Any additional words can be removed as in the sixth line above – you might need to go back to this line to add/remove words from the list depending on the result of your wordcloud.

3 Create a document term matrix and convert to a dataframe

The wordcloud2 package requires a dataframe as the input, with words or phrases in the first column and a numerical value (ie. how many times the word appears in the text file) in the second column to depict the size of the words in the wordcloud.

You’re now ready to run the wordcloud. In our example we’ve used the UK Prime Minister’s calamitous speech in Manchester 2017. 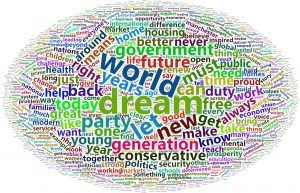 Please note that your first comment on this site will be moderated, after which you will be able to comment freely.

Sign up to our newsletter and we will send you a series of guides containing tips and tricks on data science and machine learning in R.

The hidden art in pi

A series of visualisations created using the ggplot2 package in R and the first million digits of pi.

Create a unique population density map of the UK in R using ggplot2 and geom_point.

Exploring the randomness in pi with a random walk inspired visual

Plotting an artistic map of London in R.

This website uses cookies to improve your experience while you navigate through the website. Out of these cookies, the cookies that are categorized as necessary are stored on your browser as they are essential for the working of basic functionalities of the website. We also use third-party cookies that help us analyze and understand how you use this website. These cookies will be stored in your browser only with your consent. You also have the option to opt-out of these cookies. But opting out of some of these cookies may have an effect on your browsing experience.
Necessary Always Enabled
Necessary cookies are absolutely essential for the website to function properly. This category only includes cookies that ensures basic functionalities and security features of the website. These cookies do not store any personal information.
Non-necessary
Any cookies that may not be particularly necessary for the website to function and is used specifically to collect user personal data via analytics, ads, other embedded contents are termed as non-necessary cookies. It is mandatory to procure user consent prior to running these cookies on your website.
SAVE & ACCEPT